Yesterday we had Cornish game hens for supper. We like to have them now and then and it had been a while since we had any.

We opened the packages so we could start preparation and found hens that were in a sorry state. I should have taken pictures of all of them. We made three and all three were damaged in some way. One of them had a mangled leg. The other two had damaged breasts--specifically the skin. The skin had tears and some was missing. I ended up barding all three hens. Two because of the skin and one just to take attention away from the mangled leg.

What in the world are they doing to these hens at the processing plant? I don't recall ever seeing any before that were in such sorry shape.

We were having an informal supper so it was no big deal. The flavor wasn't affected by the damage, either. But what if I was having a dinner party and had hens in such bad shape? I would be mortified.

Here's a photo of the hen with the mangled leg. I was unable to truss the bird properly so the string is all over the place: 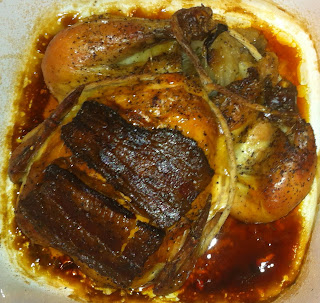 The legs were still spread out too far in spite of the trussing. Don't get me wrong, the flavor was still great. It's the aesthetics that are bothersome.

I'm going to write a letter to Tyson about this. The hens we purchased were under the "Patti Jean" label. Maybe they will do something about it so unsuspecting people don't have to deal with such a mess.

Please let me know if you have had the same experience with Rock Cornish Game Hens.

Enjoy your day! Especially at suppertime! :)
Posted by Michele at 1:20 PM