We had a very large discussion about bitter cucumbers last night. This was a big practice in our family, at least on the Czech side. Mom doesn't remember Great-Grandma Hintz (the German side) doing this, and neither do I. (I remember Great-Grandma Hintz's "cottage of tomatoes," though...that's definitely a story all its own and I'll have to remember to cover it in another post).

E.J. remembers her mom doing this (her mom was my great-aunt, Albina). My Czech grandma, Nan and Aunt Albina swore that this helped remove the bitterness in cucumbers. Their parents told them so, and so they continued the practice unfailingly.

The consensus as of last night is this: E.J. still faithfully executes the practice of rubbing. Mom does it only once in a while. I don't do it at all any more because I stopped being a believer some years ago.

This doesn't mean I am shaming my ancestors or being unloyal to them, as the tone in E.J.'s voice suggested when I told her that I don't do it anymore.

I noticed that the bitterness was at the stem end most of the time. Sometimes it did travel farther or was even in other areas but for the most part--the stem end was the problem. So I just started cutting off the stem end (and farther up if necessary).

I noticed that when there was bitterness in the cuke, there was usually an area that looked drier and spongey. I thought it might be related. (I also noticed that if I forgot to water the garden and the cucumber vines got too dry, the cukes were almost always bitter).

We didn't have the internet back then and I didn't go tearing off to the library to get into the reference books. I had plenty of cucumbers to study.

After our large discussion last night, I decided to do a little research and see if I could find some definitive answers about rubbing the cut end of the cucumber to the other end in order to remove bitterness.

It was an interesting search. I found that the practice is not limited to the South. It's all over the U.S. It's not limited to Czechoslovakians, either. There are Germans who engage in this practice. Some Canadians do it. I found some British practitioners, too. I found practitioners in India as well, but in that instance, I found that the family rubbed the cut end on the cuke to get rid of "latex." (Is the word latex in India exchangeable for the English word for bitter? I don't think so but I didn't look into that little tidbit in depth).

There were variations in the way to do it, and different explanations as to why it worked. Some Canadian practitioners said you must cut both ends off and make notches on the ends before rubbing. An American variation stated that you must sprinkle salt on the end before rubbing.

All of the practitioners that I discovered while I was searching were doing this because it had been passed down the family line. I couldn't find any hard scientific data about this practice. (Yes, I even checked "Snopes," but the only discussion about it was limited to the message boards.)

Am I lookin' for cukes in all the wrong places?

I did find some information at Washington State University about removing bitterness from cucumbers. Cut off the stem end and/or peel the cucumber. You can also slice it, salt it and let it sit for a while, then rinse and prepare as normal. No mention of rubbing.

So Does it Work or Not?

Everyone has explanations about why this practice supposedly works and variations of the practice.

Well, I vote no. It doesn't work. I apologize to any ancestors or anyone else that I may be offending or if it seems like I am blaspheming to make this admission, (I guess E.J. thinks I am nothing but a Benedict Arnold), but I just don't believe in this anymore. That doesn't mean that I don't believe in magic, especially "Kitchen Magic," but this? No.

Show me some definite, hard facts and I will change my mind. Find me a white-haired scientist with bushy eyebrows that conducted actual physical experiments on cucumbers and then measured the results with delicate instruments.

Oh, and I have to add: the bitter cukes are most common if you raise them yourself or buy them at farmer's markets and such. The variety used for pickling seem to be the most susceptible. Another "official" site claimed that commercially grown cukes are bred so that the amount of bitter compounds are reduced. (I can't find the site now but I'm sure that this is probably true since we live in a world of "Frankenfood.")

I would love to know the origin of this practice. Does your family do it? Please leave me some feedback. It really is one of those great mysteries. We'll call it: "The Cucumber X-Files." I think this mystery would leave Mulder and Scully in a pickle. Ha ha ha! ;) 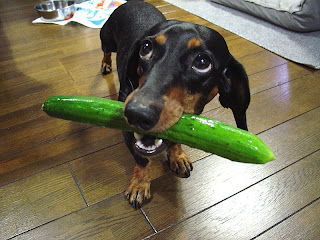